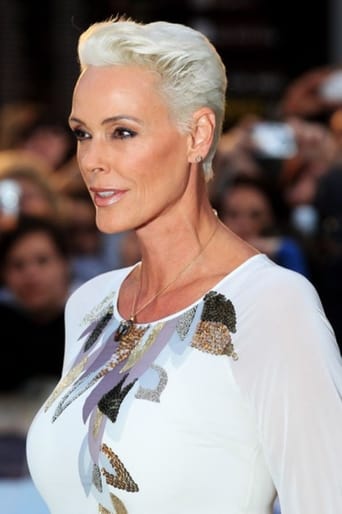 Brigitte Nielsen (born 15 July 1963) is a Danish actress, musician and television personality, who began her career with appearances in the 1985 films Red Sonja and Rocky IV and is also known for her marriage to Sylvester Stallone. She subsequently appeared with him in the 1986 film Cobra, and was noted for her widely publicized breakup with Stallone in 1987, and her relationship with New York Jets Mark Gastineau in 1988. Her exploits were well-covered in the entertainment media in the 1980s, and the world press started referring to her as an "Amazon"  because of her tall stature (verified by the Guinness Book of World Records at six feet, or 1.82 meters).  She first commented on her stature and used the term "Amazonian" to describe herself in 1985. She later built a career appearing in B-movies, and in the 2000s, for appearing on reality shows such as The Surreal Life, on which she met and began a relationship with rapper Flavor Flav. In 2008, she appeared on the reality show Celebrity Rehab with Dr. Drew, which depicted her and several other celebrities dealing with recovery from drug and alcohol addiction. Description above from the Wikipedia article Brigitte Nielsen, licensed under CC-BY-SA, full list of contributors on Wikipedia​